In the US to indicate two things which are truly… incomparable, one says “oranges and apples”. In continental EU, we  say “apples and pears”.

This case deals indeed with apples and pears.

On 31 January 2019, the General Court of the European Union had to decide about the similarity between an apple and a pear (case T-215/17):

Pear Technologies Ltd, tried once again to obtain registration for a pear in relation to technological goods and services in classes 9, 35 and 42.

Apple Inc. opposed the registration, hoping to obtain the same result as in its opposition against a grey pear (shown below), where the Board of Appeal’s view was that the two signs were visually similar and the applicant was trying to mimic the iconic apple, riding on its coat-tails.

Also in this case, the Opposition Division and the Board of Appeal, despite the new stylisation, still held that trademark applied for ‘imitated and at the same time mocked and defied’ the earlier reputed mark, by using the fruit which is the most similar to the image of an apple and which is its closest alternative in real life. In this way, consumers would perceive products bearing the “pear” as alternative to Apple’s products.

The General Court (GC) reversed. It held that the finding of several commonalities on a visual level was incorrect. Indeed, the only commonalities are the presence of black colour and the similar positioning of the figurative elements placed on top which will probably go unnoticed among the relevant public, while the dissimilarities are more striking:

Therefore, having regard to those differences, the GC held that the conflicting marks, each considered as a whole, produce a different overall visual impression.

As for the conceptual “link”, the GC held that the BoA’s finding that apples and pears were associated in many ways throughout the relevant territory and were common alternatives to each other was not supported by any concrete evidence. Furthermore, there is a ‘specific concept of antagonism’ between apples and pears, in several EU languages, as they are used to illustrate two things different and not comparable. The application of Article 8(5) EUTMR (the special protection of marks with a reputation in EUTM oppositions) requires the signs at issue to be at least similar. Even assuming that the conflicting marks evoke the idea that two things are incomparable, this does make them similar, but rather supports the absence of any conceptual similarity.

In other words, the GC found that the BoA’s idea that something like “apple and pears”, commonly understood as figurative speech for things that are totally incompatible, at odds, incongruous, conflicting, clashing, discordant, antagonistic, mutually exclusive, different, were instead considered capable of creating a link from one to another, was illogical.

What about pineapple and prickly pears? 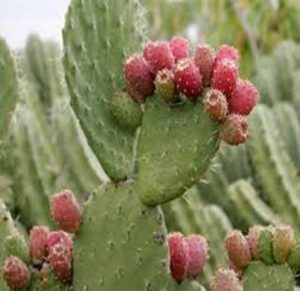