In TBL Licensing LLC v Vapesol-Fábrica de Componentes para Calçado Unipessoal Lda (Case R 2283/2019-3), the Board of Appeal of the EUIPO had to decide whether a registered Community design (RCD) representing a sole for shoes was to be considered invalid based on a prior design.
A key issue was the admissibility of commercial photos of the prior design submitted during the exchange of arguments and after the request for a declaration of invalidity had been  filed. 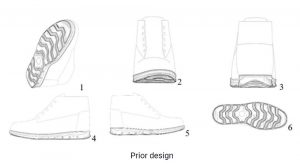 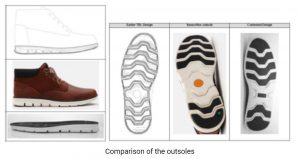 Board of Appeal decision
Admissibility of additional designs
The Board of Appeal stated stated that:
it is no longer possible to introduce additional earlier designs [here, commercial photographs] that could form an obstacle to the novelty or individual character of the contested design into the proceedings once the application has been filed if the effect is to extend the proceedings and/or alter its subject matter (22/03/2019, R 1283/2018-3, Goggles (part of -), § 16-22; 11/12/2019, R 311/2019-3, Hookahs, § 26-28).

Although the board has discretionary powers to consider late evidence, these can be exercised only if the subject of the proceedings is not altered. Here, the board held that the “commercial photographs” of the prior RCD would not be taken into account due to their late submission.

Informed user
The Board of Appeal then considered the definition of the informed user for “soles for shoes”, which had a significant impact in this case.
According to previous case law, the informed user for “soles for shoes” is neither a manufacturer nor a seller of soles (Case T‑9/07 (metal rappers), Paragraph 62). Therefore, as the sole is part of a shoe, the informed user is someone who purchases, uses and possesses a certain degree of knowledge of shoes, who has become informed on shoes, visits shoe stores and generally shows a relatively high degree of attention
when using them.
Therefore, the decision of the informed user to purchase and use a particular pair of shoes is also based on the soles (in particular their bottoms): the sole is a relevant part of any shoe since it provides, among other things, support, flexibility, height or flatness – all aspects which the informed user will carefully assess.
In addition, the board confirmed that:

The “other perspectives” to which the board referred to were, in this case, the soles, the design of which was therefore very relevant in the overall impression of the informed user.
Due to the differences between the designs – the shape of the central element of the soles, the direction of the stripes, the number of the tread grooves and the three-part segments – the overall impression produced by the contested RCD on the informed user was found to be different to that produced by the prior design.

Comment
This decision of the Board of Appeal correctly highlights that the informed user deeply in􀂧uences the outcome of each case. However, the board’s finding that the late submission of a “commercial version” of a registered design is not allowed seems – arguably – objectionable. In addition, the board’s rationale might appear to side with one the most ‘hated’ stereotype in intellectual property, whereby a few slight differences between your product and a previous design will give you a free pass.