We know that save in “exceptional” cases, colours do not initially have a distinctive character, although they may be capable of acquiring such character as the result of the use made of them.  But what if the colour is unusual with regard to the products it designates –  does this help to be included in the  “exceptional” category ?

Glaxo Group Ltd filed an EUTM consisting of the colour purple   (Pantone 2587C)  for asthma treatments in Class 5 and corresponding inhalers in Class 10.

The mark was refused by EUIPO and the Board of Appeal confirmed,  holding that “in view of the goods for which the mark had been sought and the evidence submitted, the choice of colours [purple] referred to the main active ingredients, the use for which the medicinal product is intended and its characteristics”.  In addition the Board of Appeal also found that the relevant public had a specific interest in having colours kept available for competitors in the market of pharmaceuticals, since patients are inclined to take a generic pharmaceutical product more regularly, and even more so if the presentation of the medicinal product is similar to that of the original product (Glaxo uses the purple colour Pantone 2587C on its inhalers called “Seretide” which combine two different active ingredients, one with a preventive function, and the other with the function to keep the disease under control in long term). 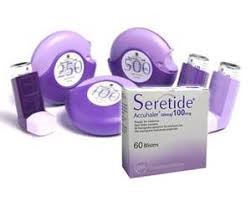 Glaxo went before the GC, arguing inter alia that the colour purple was specifically chosen as a unique identifier of its Seretide inhaler, since the colour is “unusual, unique and memorable” and has not been used by any competitor. In addition,  it provided sufficient evidence that, on the market for the goods concerned, there is no legislative or regulatory provision or informal convention restricting the use of the colour, that goods with the same characteristics were marketed in a wide variety of colours, and that consumers consequently understood that colour could designate the origin of the goods. Moreover, there is no evidence that any shade of purple – still less the shade Pantone 2587C – conveys a message to the public about any of the characteristics of the goods for which registration of the mark has been sought.

The GC was unconvinced.  It found that while is true that in absence of regulated colour-coded system manufacturers of inhalers are in principle free to choose whichever colour they prefer, still the choice the colour must not create confusion in the market with other products of the same kind where “informally agreed colour convention exists”. This was precisely the case of inhalers, where patients and medical professionals identify with colours the specific active ingredients conveyed by the device, for example blue for reliever medication inhalers and brown for preventer inhalers.

Indeed, Glaxo’s inhalers are characterized not only by Pantone 2587C, but also by diverse shades of purple, namely lighter shade when the strength of the medicinal product is weaker, and darker shade when the strength is higher.  Hence,  according to the GC,  if the colour and shade conveys to the public specific information relating to the characteristics of the goods in question, then  granting a monopoly on that colour could be unfair for the other manufacturers of the same type of product.

Finally, that the colour purple was “unusual, unique and memorable” did not help as novelty or originality are not relevant criteria in the assessment of whether a mark has distinctive character. Therefore, differences in relation to the norm or customs of the sector, or even the most common configurations, are not sufficiently characteristic or memorable to make the mark distinctive.

While one might agree with the GC’s preoccupations about creating unjustified monopolies, the findings about the basic irrelevance of having an  “unusual, unique and memorable character” seem too harsh, and one may observe that for 3D marks, those characteristics seem instead to be quite important,  see our article on case C-783/18 P. Maybe some further thinking to avoid creating irreconcilable differences between marks might be welcomed.