With decision of 15.10.2018 on case T-7/17, the General Court (GC) has clarified an important factor for applicability of Article 8(3) EUTMR, on the prohibition for registration of a trademark filed by an agent or a representative of the trademark owner. However, as the GC’s decision has been appealed (C-809/18 P), we will have to wait to see whether the GC got it right or not.

The UK based John Mills Ltd filed an EUTM application for the word mark “MINERAL MAGIC” for some cosmetic products in class 3. The US-based Jerome Alexander Consulting Corp., filed an opposition on the basis of its earlier registered and non-registered American word marks “MAGIC MINERALS BY JEROME ALEXANDER” and “MAGIC MINERALS” designating respectively “face powder featuring mineral enhancements” and “cosmetics”.

The EUIPO rejected the opposition in first instance, because in addition to the lack of substantiation of the non-registered earlier right “MAGIC MINERALS”, the opposed EUTM was neither identical nor substantially identical to the earlier mark “MAGIC MINERALS by JEROME ALEXANDER”. The Board of Appeal reversed, holding that the trademark application filed by an agent or a representative of the trademark owner may consist not only of an identical trademark but also of a substantially similar sign for equivalent goods to be opposed by the legitimate owner of the mark.

The Board of Appeal’s rationale, in absence of any explicit provision of the law clarifying this issue, would be to guarantee protection also against slightly modified trademarks that do not substantially change the distinctive character of the original owner’s mark. Incidentally, this is the approach currently followed by EUIPO, as shown in the EUIPO Guidelines for Examination, Part C, Opposition, page 19. 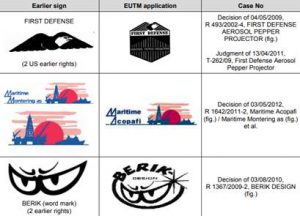 On appeal, however, the GC disagreed, saying that Article 8(3) EUTMR can only apply where the signs at issue are identical (and not merely similar).

According to the GC, this conclusion follows from the “evident” intention of the EU legislator, that refrained twice during the legislative process from expressly mentioning in the EU Trademark Regulation that the provision of Article 8(3) could apply also in case where the marks are similar. This is documented in the “travaux préparatoires” of the Council Regulation on the Community Trademark No. 40/94 of 20 December 1993, and in the EU Council document No. 11035/82, which contains the conclusion of the Working Group on the Regulation of the Community Trademark. Finally, the GC cited Article 6 septies of the Paris Convention, from which Article 8(3) originates, and whose wording suggests, according to the GC, that the proprietor’s trademark and the mark filed by an agent or representative must be the same. The GC’s interpretation, which only focuses on a literal examination of the text of Article 8(3), echoes the old Latin brocard “Ubi lex voluit dixit, ubi noluit tacuit” (“where the law willed, it spoke; where he willed not, it was silent”), a literal approach and criterion which the CJEU has sometimes not followed.  For instance, in the Davidoff case, C-292/00, the CJEU held that Article 5(2) of the Directive must not be interpreted solely on the basis of its wording, but also in the light of the overall scheme and objectives of the system of which it is a part. In fact Article 5(2) referring expressly only to the use of a sign for non-similar goods or services, would preclude its application where a sign is used for identical or similar goods or services. Instead, as a result of this non-literal but teleological approach, the CJUE thus allowed application of Article 5(2) also for identical or similar goods or services.

It is to be seen whether the CJEU will endorse the GC’s literal approach or will, once again, look at the “the overall scheme and objectives of the system” to come up with another conclusion.