The EUTMR No. 2015/2424, as well as the Directive No. 2015/2436, have introduced various changes to EU and national trademark laws but both failed to provide transitory rules determining what is the applicable law for trademarks registered before the entry into force of the new law.

In case C-21/18, Textilis Ltd and Ozgur Keskin v Svenskt Tenn Aktiebolag, decided on March 14, 2019, the CJEU was asked whether the wording “other characteristics” of the new Article 7(1)(e)(iii) Regulation 2015/2424 may or may not be applied retroactively.

Svenskt Tenn AB filed an infringement action against Textilis Ltd and Mr Keskin before the Stockholms tingsrätt (District Court, Stockholm, Sweden). The alleged violation regarded a figurative EUTM consisting of a textile design inspired by the map of Manhattan and including the word MANHATTAN, shown below, which was registered before the entry into force of the new EUTM regulation. 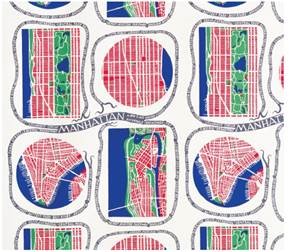 Textilis Ltd and Mr Keskin counterclaimed for invalidity of the EUTM for being a shape which gives a substantial value to the goods. Following rejection of the counterclaim on the ground that the mark was not a shape, Textilis Ltd and Mr Keskin filed an appeal seeking a declaration of invalidity of the mark Manhattan pursuant to the new Article 7(1)(e)(iii) EUTMR, which applies not only to shapes but also to “other characteristics” of a sign.

The  Svea hovrätt, Patent- och marknadsöverdomstolen (Svea Court of Appeal, Patents and Market Court of Appeal, Stockholm), stayed the proceedings requesting the CJEU, inter alia, if Article 4 of  Regulation 2015/2424 could be interpreted as meaning that Article 7(1)(e)(iii), in its new wording, is applicable to a court’s assessment of invalidity that is made after the entry into force of the amendment, namely after March 23, 2016, even if the action concerns a declaration of invalidity where the action was brought before that date and therefore concerns a trade mark registered before that date.

The CJEU answered that in order to ensure observance of the principles of legal certainty and the protection of legitimate expectations, the substantive rules of EU law must be interpreted as applying to situations existing before their entry into force only in so far as it clearly follows from their terms, objectives or general scheme that such effect must be given to them. Since Regulation No 2015/2424, which entered into force on March 23, 2016, does not contain any provision expressly providing that Article 7(1)(e)(iii) of Regulation No 207/2009, as amended, is applicable to EU trade marks registered before that date and since it is not apparent from either the purpose or the scheme of Regulation 2015/2424 that the EU legislature intended to confer retroactive effect to Article 7(1)(e)(iii) of Regulation No 207/2009, as amended, the CJEU concluded that Article 7(1)(e)(iii) is not applicable to marks registered before the entry into force of the amended regulation.

The CJEU’s answer is not surprising. Already in past cases the CJEU had drawn the line on questions related to the applicability of new provisions to already existing situations looking at whether at a certain point in time the relevant right had or not been already registered (see LAMBRETTA for example – here previously commented –  where the CJEU excluded the application of the IP Translator principles because the case regarded a trademark registration and not a pending trademark application).

That said, as the new Article 7(1)(e)(iii) was (and is) immediately applicable to all trademark applications pending at March 23, 2016 (and the same should apply to national marks pending at the various dates of entry to force of the national laws implementing the Recast Directive No. 2015/2436), it is extremely puzzling and somewhat incomprehensible why certain kind of trademarks which were granted registrations immediately before March 23, 2016 are valid as a matter of law, while the same kind of marks simply because they were pending on March 23, 2016 could be refused as a matter of law.

Indeed, it seems that despite what the CJEU said, there is an inherent inconsistency between the principle of legitimate expectations (which is a private interest) and that of legal certainty (which is a public interest and requires that similar situations should all be dealt in the same way). Ultimately who decides which one prevails should be the CJEU, and it seems that in this case it perhaps missed an opportunity.